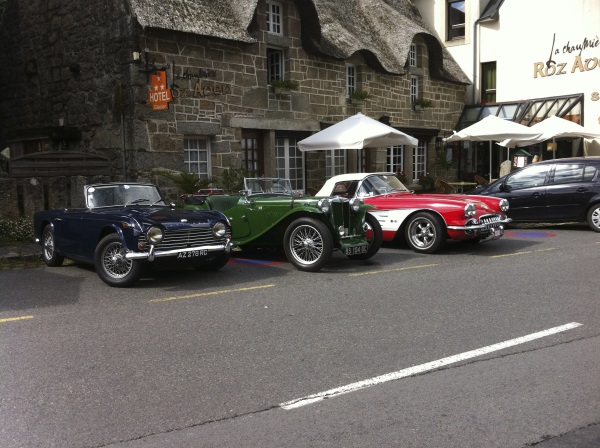 The club’s Autumn tour was to Brittany where we staying in the Oceania hotel in Quimper. Departing Ireland on Friday 13th  September and returning to Ireland Saturday 21st. There were 11 cars and 24 people on the tour.

Our activities started on the Sunday when we joined the local classic car club on their run. We were met at the hotel by the President of the club at 9.00am and he brought us to Pluguffan where the cars were assembling. The run took us on some lovely quiet country roads up to the coastal town of Douarnenez where we had a coffee break before returning to Pluguffan for Aperitifs supplied by the local club. From here we went to the ‘Manoir be Kerazan’ in Loctudy where we had more aperitifs compliments of the Madame from the Manoir. Plaques were presented to Madame and Jean-Noel, President of the local club in memory of the visit by WVVMC. This was followed by a picnic. Our thanks to Hilary Fennell, Rina Wijnekus and Rosalie Andrews for gathering the picnic goodies which was more than enough for our group, and to Frank Mullan who ‘found’ a few bottles of wine in the boot of his car. After the picnic we were able to have a tour of the Manoir. Unfortunately we had to leave early in order to return to our hotel for dinner.

On Tuesday afternoon we made a short trip to the coastal town of Bénodet before heading to the village of Clohars-Fouesnant which was recently twinned with Oranmore. Here we were greeted by the Mayor and the local community and were provided with some light refreshments. A presentation was also made to the Mayor in memory of our visit.

On Wednesday morning led by Jean-Noel we set off on a run, again on lovely country roads, for the village of Pont-Aven. On the way we were joined by some more members of the local club. Here he had arranged for a stop for lunch in a local crepere. We were also able to spend a little time in the beautiful village before continuing on the run. Taking in the countryside we eventually arrived in the town of Concarneau. By way of thanking our hosts for taking the time for bringing us on the run a small presentation was made to the driver of the car which we voted on as ‘one which we would like to own’.

Dinners for the tour party were held in our hotel on the Saturday and the Sunday and were very tasty; in fact many members had their dinner in the hotel on many evenings.

The Monday, Tuesday morning and the Thursday were free so people could do their own touring and sightseeing.

On each of the evenings we all met in the hotel bar and discussed our day’s activities. A pint of beer in the hotel was €7.00, so not too much beer was drunk. The staff in the hotel were very helpful especially Alexandra, one of the receptionists. She had spent some time as part of her training in Galway and Westport.

Our final dinner together was held on board the ferry coming home. Again this was an excellent meal and with some money still in the kitty we were able to include some wine with the meal.

Our thanks to local Oranmore resident Joan Reed who did some excellent work for us translating. She was also able to set up the arrangements with the local car club for the runs and also the twinning meeting in Clohars-Fouesnant.

The oldest car on the tour was a 1960 Wolseley 1500 of new member Jimmy Rushe and the youngest was a 1983 Daimler of Ernst Wijnekus. Thankfully we had no breakdowns while in Brittany on tour.
I believe that overall the tour was a success and that everyone enjoyed themselves.

A selection of photographs from this trip are available on our PHOTO GALLERY.